While unravelling the mess of scenes, half finished stories, and incomplete character and plot arcs that currently equals the Blood of the Nagaran series, I’m coming across some scenes that I love!

I’ll soon be doing a complete rewrite so I’m having to let go of these words and trust that the rewrite will be even better. Because these scenes probably won’t make it to the final books, I wanted share some of my favourites with you.

They’re not technically sneak peeks but they do uncover parts of the story arc. I hope they wet your appetite. Note: These scene snips may contain spoilers!

The main hall of the Hierarchy was strangely quiet in the darkness of pre-dawn. Michael strode across the hall, his footsteps muted on the pale tiles. As he touched the handle of the door to the Room of Records a soft voice broke the silence. “So good of you to join us.”

Michael spun around, startled. His gaze narrowed as he observed the shadow of dark clothing and darker wings that stained the white lounge. A flicker of firelight glittered from the crystal glass in the man’s hand. Michael tilted his head in acknowledgement, “Uriel.”

“The Hierarchy has been in uproar, Michael. Have you any idea?”

“Tempany has things in hand, she always does.”

“She is as destroyed as the rest of them. Our kind does not do well without leadership. It has been mere decades since Lucian abandoned them and now to have you do the same,” Uriel’s voice faded, leaving the thought unfinished.

Uriel pushed himself up from the lounge. “No?” He asked, tilting the glass in his hand. He watched the swirl of amber liquid a moment before returning his gaze to Michael. “What would you call it when your absence spans weeks[ How long has he been in hiding with Charlene?]? Not a word as to your safety or the direction of the Hierarchy. Tempany does her best to pretend, but she does not fool me.”

“It’s really none of your business. I’ve duties that take me from the confines of the offices here but rest assured my presence remains. I’ve abandoned no one.”

“Yes, your duty. To the whore whose violence has my own charge writhing in agony, clinging to life. Is it to that duty you refer?”

Michael gasped, clenching his fist as he narrowed his gaze. “I’ve no idea what you could mean, Uriel.”

“No? Do you imagine me ignorant?” Idly, Uriel moved across the room pacing back and fourth before the fireplace a moment before turning back to face Michael. “You stood before them, the girl in your arms, and defied them to take her. Can you imagine my amazement at your blatant disregard for the rules you’ve so long upheld?”

Michael clenched his jaw, searching for a denial that could justify his actions. “I did nothing wrong.”

“Honestly, Michael. You’re becoming more and more mortal with every breath. Do you lie to yourself as you lie to me?”

“I did my duty. What matters it to you how I went about it?”

“I’ve a duty to my charge, as you’ve to yours, Michael,” Uriel snarled. He tossed the glass at the fireplace. It shattered, flames sparking as they devoured the snifter of liquid that spattered across the embers. “Dammit, do you have any idea what you’ve done?”

“I protected my charge.”

“You may have lead to my man’s death. Even now he idles in agony. You knew he was to be protected. You assigned me to him yourself. Subverting fate? Isn’t that what we are supposed to avoid?”

Michael glared at him. “Perhaps it’s your protecting him that subverts his fate now. We cannot begin to understand the cards destiny has placed upon the table for any of us. Was Charlene destined to be taken or was my role in the unfolding of her fate supposed to have prevented that?”

“That’s just it, isn’t it? We’ve played with the forces of destiny so long that we no longer know what part we are to play in it. But my duty is to protect my charge, come what may.”

“Do you really believe that, Uriel?” Michael asked. “You know what that monster has done. How is his life of any value?”

“You decreed it so yourself!” Uriel snarled. “We do not choose which life has value and which mortals we save. You told me that.”

“I never imagined you one to blindly follow, Uriel. What if we were wrong?”

Uriel shook his head. “What does it matter? We do as we’ve always done.”

“Why? Why do we?” Michael ran a hand through his hair. He crossed to the fire and looked down in the the flickering flames. “Maybe it is time to change.”

Uriel glared at him. Michael could feel the darkness of his gaze down his back. He turned, defensive, as Uriel marched toward him. “Now? You claim now is the time to change?”

“If not now, when? Honestly, Uriel, can you justify the life you must save?”

“Can you justify that of your own charge? Of any charge we’ve ever had. Lives so fleeting that the extra breaths they took are meaningless. I do my duty.”

As he turned to stride away, Michael stepped into his path. “His life isn’t worth it. The damage is already done.”

“When did you become the juror, Michael? We do not write destiny, only follow it.”

“Do we? Do we really?” Michael asked, moving with him as Uriel went to step around him.

“Damn it, Michael. Step aside! I’ve my own charge to protect, as you have yours. If you stand in the way of that I will see to it that your destiny lies at the end of my sword.” He lifted the heavy blade from the sheath that rested between the wings on his back.

Michael’s eyes narrowed. “Uriel, I warn you, do not test me.”

“I test only your will, Michael. Remove yourself from my path.” He levelled the sword at Michael’s chest.

“The heavens do fall then, to the dark will of a man whose life destroys the heart and mind of all he touches,” Michael said. He stepped aside, but kept his gaze on Uriel. “Despite our duty, our own destiny, Uriel, we to have the power to choose.”

Uriel swept past him to the window. He slipped the blade back into its sheath, then turned to face Michael one last time as he stood on the threshold. “Do we, Michael? Or do you only imagine that we do?” He turned away again, stepping outside, and then dropped from the edge of the balcony and out into the grey sky of a rising sun.

Tagged: Birth of the Sacred Mother 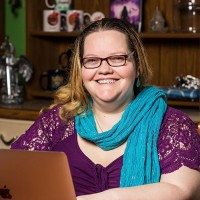